Rust removal sandblasting machineIt uses clean compressed air as the power of sandblasting to make the dry abrasive form a high-speed abrasive stream to perform sandblasting on the surface of the metal workpiece. The cutting effect produced by the high-speed abrasive flow impacting the surface of the part can realize the process of cleaning and decorating the surface of the workpiece. The purpose of the rust removal sandblasting machine is to clean the oxide scale, rust, carbon deposits, welding slag, paint marks or wear marks on the metal surface, and increase the bonding force between the covering layer and the substrate. Since the quality of rust removal will directly affect the spraying effect and quality of the workpiece, and at the same time, it will also affect the service life of the workpiece. Therefore, the blasting quality of the rust blasting machine is particularly important, and it needs to be paid attention to during the sandblasting construction. The following aspects: 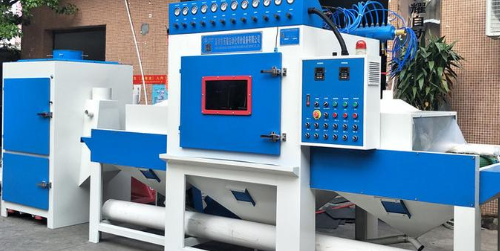 The second is the choice of abrasive. The rust-removing sandblasting machine should choose dry, hard-grained abrasives with distinct edges and corners without other impurities. Generally speaking, quartz sand is chosen as the abrasive for sandblasting. If not, coarse river sand can also be chosen. At the same time, considering the transportation cost, unit price, recovery capacity and other factors of the abrasive, the particle size of the abrasive should be controlled within 0.5-1.5mm, and it must be dried before screening and then stored indoors.

The third is the choice of pressure. The power of the rust-removing sandblasting machine comes from compressed air. As the pressure increases, the abrasive jetting speed will become faster and the efficiency of abrasive grinding will increase. Therefore, the choice of pressure should consider the thickness of the abrasive, the thickness of the workpiece and its requirements for surface roughness. Generally speaking, during the blasting operation of the descaling sandblasting machine, the air pressure of the air compressor is generally controlled at 0.6~0.65mpa, and the air pressure change is preferably between 0.5-1.0mpa. 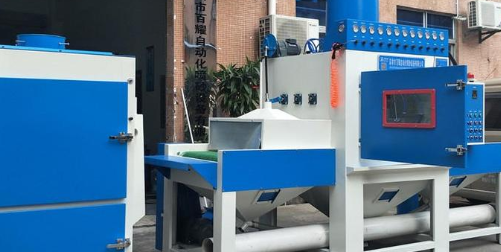 Previous: Introduction to the main functions of the automatic sandblasting machine

下一条: Talking about the problems in the process of rust removal and sandblasting machine